All Categories
Using the exhibits stamping tool
How to use automatic sorting?
10

Titles of exhibits and bookmarks Annotations on the exhibits The following document is password protected and cannot be processed How to use automatic sorting? What are the file formats compatible with e-signum?

How to use automatic sorting?

Last Update a year ago

In the exhibits stamping tool, the "Automatic sorting" button allows you to automatically sort the files uploaded by the user by attaching them, if necessary, in the corresponding subgroups.

In order for the automatic sorting to work, the name of each uploaded file must include a number and then, separated from the "_" character (usually called underscore), the desired title for the exhibit, i.e.:

With X the exhibit number.

If the file is to be attached to a particular subgroup, it must include a double numbering: that of the subgroup and then, as a separator, the character ". (dot) or a "-" (dash), that of the part and, lastly, separated once again by the character "_", the desired title for the exhibit, i.e. :

In both cases, the numbering can, if the user wishes, be preceded by a prefix in letters and without special characters such as "PJ" (prefix whose use is requested by the Télérecours website documentation).

For example, if the following files are uploaded in the order of the left-hand column of the table below, the "Automatic sorting" button will restore them to the order referred to in the right-hand column, by automatically attaching documents No. 9-1 and No. 9-2 to subgroup No. 9. 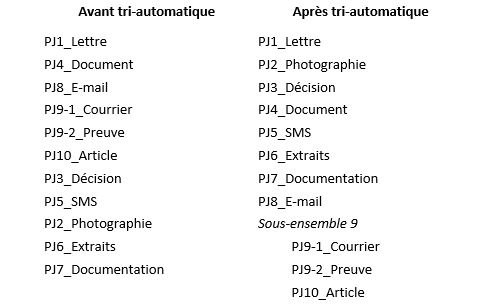 Was this article helpful?

2 out of 2 liked this article